What is the rainbow flag? The rainbow flag is a symbol of LGBT pride and diversity. It was created by artist Gilbert Baker in 1978 and has been widely used ever since. It represents the lesbian, gay, bisexual, and transgender community (LGBT) and all other marginalized groups and stands for inclusion and equality. This blog post will discuss the history of the rainbow flag and why it has become such an iconic symbol for the LGBT community.

What does the rainbow flag mean?

The rainbow flag symbolizes queer identity, diversity, and solidarity. It has become synonymous with LGBT representation, replacing prior symbols such as the pink triangle and lambda letter. The flag has become a tool for LGBT activists to create public awareness and political statements supporting gay rights in recent years. The rainbow flag holds cultural, political, and historical significance for the LGBTQ community across the globe.

It’s a significant part of the queer community because:

How Did the Rainbow Flag Become an LGBT Symbol?

Origin of the Rainbow flag

The rainbow flag traces its roots to the 1970s during the LGBT social movements. Harvey Milk, an openly gay elected official, appointed Gilbert Baker to create a symbol of pride for the queer community. Gilbert Baker was an army veteran who had served in the Vietnam War for two years, a drag queen, and a social activist. Malik commissioned Baker to design a symbol of pride for the gay community.

Baker decided to use a flag because he viewed flags as powerful symbols of pride. Baker and his compatriots may have borrowed the idea of a flag as a symbol of pride from America, reeling from the end of the Vietnam War and the disgraceful resignation of a president who used the national flag to summon the spirit of patriotism from the American public. The rainbow flag imitates how natural, diverse, and colorful a rainbow is in its natural state.

The first two original rainbow flags commissioned by the fledgling committee were hand-stitched by a group of volunteers, including faerie argyle rainbow, an official known as Lynn Segerblom, who is credited for creating the dyeing process for the original flags.

The dark history of the LGBT community’s representation symbol

What do the colors of the rainbow flag mean?

Each color of the eight stripe flag had a special meaning. The eight colors on the rainbow flag have a specific purpose.

Unveiling of the original rainbow flags

While the demand for the rainbow flag was high during its launch in 1978, the demand skyrocketed following the assassination of San Francisco gay activist Harvey Milk. Baker stopped using the hot pink stripe because the material wasn’t easily accessible, reducing the rainbow flag to seven stripes. The Paramount flag company also stopped using the hot pink lines flanking because of the unavailability of the material.

In 1979, Baker dropped the turquoise stripe to evenly split the rainbow pride flag on street lamps during a parade route. The six-stripes rainbow pride flag has been widely accepted as the standard flag for future production. It contains red, orange, yellow, green, blue, and Violet.

The rainbow flag received nationwide attention in 1989 when John Stout, a local activist, sued his landlord for forbidding him to hang a rainbow flag on his balcony. Stout won the case, which validated the LBGT movement’s fight for liberation and recognition.

The only known surviving remnant of the two inaugural rainbow flags raised in 1978 was discovered in 2021. The GLBT Historical Society received remnants of the first original rainbow pride flag displayed at the San Francisco gay freedom parade in 1978. For members of the LGBTQ movement, the rediscovered piece of the original rainbow pride flag carries a cultural, historical, and sentimental significance because the artifact is a physical reminder of their legacy.

Other LGBTQ Pride Flags and what they mean

The progress pride flag emphasizes the oneness of the LGBTQ people by integrating all queer flags into one. The flag integrates the trans flag and contains black and brown stripes to represent queer people of color and people living with the stigma of HIV/AIDS.

The flag includes shades of blue, green, and purple stripes to represent all gay men. The gay pride flag represents all men on a queer spectrum, including gender-nonconforming men, intersex, and trans.

A rainbow flag is one of the most visible representations of the gay community, but it’s not the only one. Other representative items you can use include:

· A colorful and fabulous outfit

Wear clothes that make you stand out as a gay person. Pack something spectacular, colorful, and bold. If you want to impress people at a pride parade with an impressive toned-up body, you can wear a muscle suit below your fabulous fit to gain muscles quickly.

Rainbow sunglasses can increase your cool factor, make you approachable, and protect your eyes on a sunny day. Alternatively, you can wear a face mask to cover your face and party under the sun.

Here is the thing about a pride parade. It’s not a quiet place. Pride is a celebration of life. It imitates how life is messy, noisy, and worth it. You can always carry a whistle if you are not a screamer or can’t raise your voice during the parade. Blow the whistle so hard that your ears ring.

· Dazzle with a fabulous bow tie

A rainbow-colored bow tie sets you apart as a fashion-conscious queer. You can wear it for formal pride balls, a parade, or as part of your daily wear. 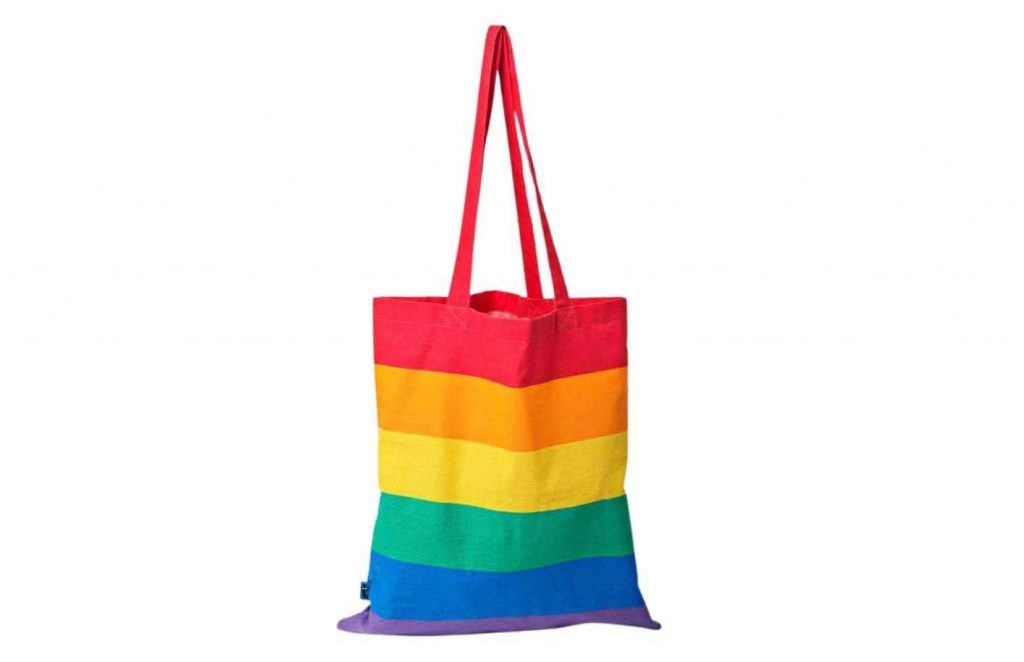 An excellent backpack covered in rainbow colors to carry your things is handy because it identifies you with the LGBT community, helps you keep your things organized and safe, and symbolizes your support for the gay agenda.

The rainbow flag is a symbol of oneness for the entire queer community. It’s an umbrella banner that holds cultural and political significance for the global liberation and protection of gay rights.