Anime Characters: Top 10 Most Muscular Of All

Do you love anime characters that are muscular and powerful? So do we! This blog post will count down the top 10 anime characters with the most impressive muscles. While there is no definition of “muscular,” these anime characters all have a fantastic physique that sets them apart. We will also look at their character traits to see what makes them unique.

Raoh From Fist of the North Star

The manga series is known for producing series with complex characters such as Tokyo Ghoul, Cowboy Bebop, Hunter x Hunter, One Piece, and Naruto. With Roah from the Fist of the North Star, the franchise lives up to its reputation of creating unique and impressionable anime characters. Ruthless, powerful, massive, and a strong military commander are just some words that best describe Roah, also known as the King of fists. Because of his mastery of Hokuto Shinken, his fighting power is exemplary.

Physically, Roah is huge, muscular, and powerful. The guy is agile, fast, and has a mean punch. Roah’s character design in the manga series is so unique and well-designed that, as a fan, you don’t know whether to wish him success or failure in his ambition to conquer the world. Roah’s character arc is quite interesting. As a boy, his power is in the strong bond he shares with his siblings, while as an adult, it’s in his ambitious personality.

Major Alex Louis Armstrong is an exceptionally tall and muscular anime character. With a body sculpted like a Greek statue, Armstrong uses his powerful muscles and huge body for good. Alex’s strong jawline, cool mustache, beautiful cleft chin, and sexy bald head with a single strand of hair set him apart as a hero. Armstrong doesn’t need to overexert himself to showcase the well-defined muscle groups that set him apart as a handsome and manly anime character, whether in uniform or shirtless.

Alex’s kind heart and compassionate nature made him an outcast in the eyes of the military and his family. Though he is a noble and a warrior, Alex recognizes the brutality of war and refuses to fight, resulting in his siblings being labeled a coward. Although he could have used his powerful, manly physique to terrorize his adversaries, he emphasizes their situations. Fans of anime characters hail Major Alex Armstrong as a hero because of his kind heart, fairness, and empathy.

Yami Sukehiro rises from a humble beginning as the son of a fisherman to become a powerful man in the Clover kingdom. Yami is the first captain of the Black Bull squad and a former member of the Aqua Deer. Yami’s personality falls on the reckless side, often escalating situations with angry outbursts and death threats.

While his personality is not perfect, his body is a work of art. The guy is super tall, muscular, with piercing eyes, a defined jawline, and beautiful black hair combed backward. Yami is charismatic, possesses a rare form of dark magic, quick reflexes, enhanced strength, and is a master swordsman. These qualities make him a favorite character among fans in the anime universe.

Muscular From Boku no Hero Academia

Fans have a love-hate relationship with this exceptional villain from the manga series. Muscular may not be your favorite character in the anime universe, but you have to admit the guy has a beautiful physique.

Muscular has a nasty little habit of killing little kids and innocent people and enjoying it, but that doesn’t mean you can’t recognize his manly beauty and physique. Bloodthirstiness aside, muscular has a great body. He has well-defined muscle groups, a bulky frame, large biceps, a noticeable scar on the left side of his face, and a cool prosthetic eye to play up to his ruthless personality. Muscular’s costume comprises a black cloak and a super awesome mask with holes that give him a menacing look completing his villain look.

How far would you go to get your favorite food? Would you let fear, danger, and fierce beats prevent you from getting precious ingredients to complete your meal? If you are like Toriko, then nothing can stand in your way. Toriko character illustrated by Mitsutoshi Shimabukuro in the manga series, follows Toriko as he searches for food, often in dangerous environments. Standing at over 6 feet tall and weighing more than 230 kgs, Toriko’s build is impressive.

Don’t let the blue hair fool you; Toriko is a masterful hunter who relies on his wit and physical strength to hunt for rare food to complete his meal quest. Toriko relies on his superhuman strength and a strong sense of smell to find and capture his prey. The guy is a badass who can fight superhumanly, kill a beast with bare hands, and a punch man who can shatter mountains with a single fist.

Guts perfectly portray the internal struggle humans face trying to balance human relationships. Also known as Black Swordsman, Guts is a wanderer who travels the world searching for a purpose. Cut from the womb of his deceased mother, Guts’ life begins with violence that becomes part of his life as a boy when he joins a mercenary band and in adulthood when he becomes a warrior.

Guts complex character design makes him one of the best anime characters in the manga series. He is a good guy that constantly faces betrayal from his allies throughout his life. As a boy, his father figure abuses him, which results in Guts killing him in self-defense. Eventually, Guts overcomes his childhood trauma, finds a girl, and falls in love. Life is warm and fuzzy for Guts and his lady love until his mentor and leader rapes Guts’ love interest and sacrifices his followers, Including Guts, to demons to save himself. This is an essential aspect of Guts life because it turns him into an angry protagonist driven by hate and revenge.

Yujiro Hanma From Baki the Grappler

Ever wondered what the strongest human on earth looks like? Standing over 6 feet tall and weighing 265 pounds, Yujiro Hanma has every man’s perfect, powerful physique. Yujiro has long muscular legs, broad shoulders, and huge back muscles that can transform into a demon when he gets into a fight. As the main protagonist of the Baki franchise, he is an exceptional character in the series. A more fitting name for Yujiro is punch man because it’s believed he can stop an earthquake by punching the ground.

Broly ranks up high among popular anime characters surpassing even Super Saiyan Goku. Broly’s body mass is insane, and his powers and abilities are out of this world. Brows have a raw power so great that it surpasses that of Beerus, the God of Destruction. Broly is a survivor exiled to planet Vampa because of his powers at his core. Broly anime character reincarnation in the Dragon Ball Super is portrayed as naïve, loyal, compassionate, and empathetic.

If you love watching JoJo’s Bizarre Adventure series, Joestar is probably your favorite anime character, and with good reason. He holds the record as one of the most recurring characters in the entire series.

Toshinori Yagi is a fan favorite main protagonist in my hero academia series. Yagi, also known as the All Might, symbolizes hope for heroes because of his dedication to fighting villains and making the world a better place. All might have a classic superhero look that makes him stand out as a great anime character. His uniform consists of cool superhero boots, golden custom gloves, and a bodysuit with a color pattern of blue, red, and white.

Unlike other anime characters, All Might’s physique is lean, bordering on skinny, with long arms, legs, and neck. All mighty powers before his retirement include One for all power that enables him to enlarge his physical abilities to superhero-level capabilities that enhance his speed, flexibility, and strength. While you may never witness the full power of All Mighty in a battle because he has retired, his memory as one of the good guys that fought for justice lives on.

While watching and reading about animation characters is fun, becoming one can be thrilling. Famous anime characters are characterized by well-built physiques, well-defined muscles, large biceps and triceps, big pecs, and broad shoulders. Your desire to look like your favorite anime characters is understandable as an anime fan. Who wouldn’t like to look like their favorite hero every day or on special occasions like Halloween, for a role play, or cosplay? 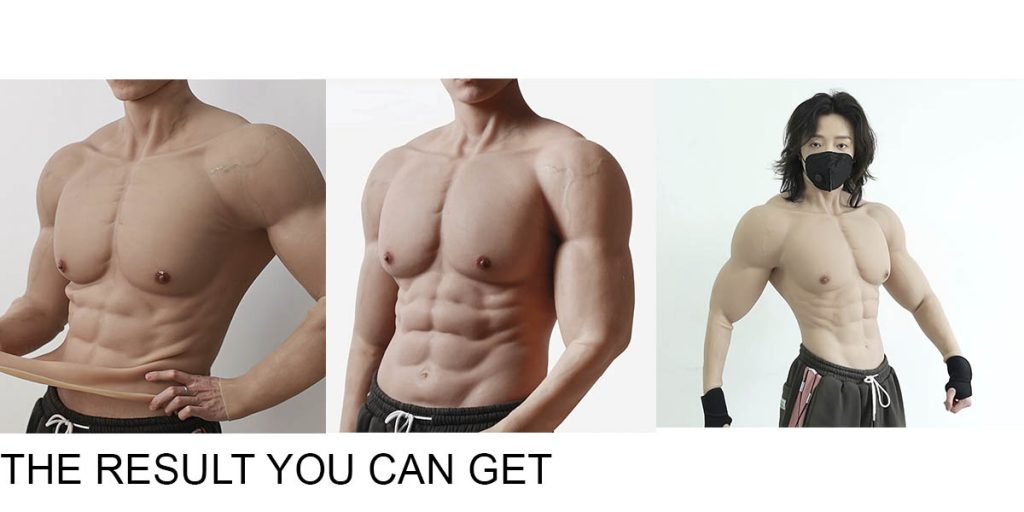 Well, it’s super easy. You can easily transform into an anime by wearing a muscle suit. A muscle suit can help you quickly and safely increase your muscle size and shape, giving you a toned physique to rival the most buffed-up anime characters. Depending on the body part you want to accentuate, you can wear a full, upper, or lower body muscle suit to enhance your appearance.

You can not dispute the effect of the animation genre on modern entertainment. Anime fans, you and old, enjoy various anime characters, heroes, and villains alike because of the characters’ positive impact on morality and character. As the animation genre becomes more popular, fans can enjoy high-quality entertaining and educative programs such as Death note, one punch man, and Cowboy Bebop. To be a part of the anime world, you can buy a bodysuit costume to help you gain a physique that rivals your favorite anime character.